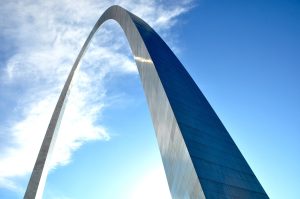 2023. St. Louis enters MLS for the first time! St. Louis City SC takes the field in its inaugural MLS season, making history in the process. As I point out in This Is Our CITY, St. Louis should eventually be champs and have a strong franchise for years to come.

MLS started in 1996. Why such a long wait for the king of soccer, St. Louis?! This little tidbit is elucidated in This Is Our CITY and let’s just say ownership issues combined with a proper stadium were reasons for the delay. That is, well-intentioned ownership issues and stadium proposals that didn’t materialize to the liking of MLS leadership. The current ownership group, led in part by Carolyn Kindle Betz and Jim Kavanaugh, pushed it over the top. 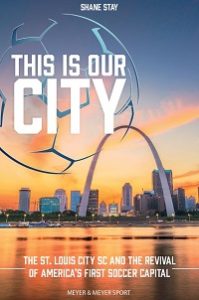 Early on, the St. Louis Stars (of the NASL) had players from various backgrounds, yet under Coach Bob Kehoe the Stars were known for a one-time “all St. Louis” starting lineup with top-notch players, including Pat McBride. Unless there’s some secret archive of the Seattle Sounders that slipped by my radar, this is the only time such a thing has occurred in American pro soccer history. (Or any pro sport, for that matter.)

Since the Stars, St. Louis made history with a number of pro-outfits, including but not limited to the St. Louis Steamers and St. Louis Ambush, the latter of which won the indoor championship in 1995 under legendary owner Abe Hawatmeh.

From that point, there were a couple pro-outdoor ventures, one being Saint Louis FC of the USL Championship league.

But St. Louis City SC is the milestone. This is the biggest venture for St. Louis pro soccer, to date.

Over the years, by way of club, high school, college, pro, and the USMNT, St. Louis has contributed a voluminous amount of talent to US soccer at large. As the original headquarters of soccer in America, this contribution has been heralded as overwhelmingly unique, to say the least. To this date, St. Louis University is still the number one team in NCAA history with the most titles, 10. Lurking close behind in second-place with eight is powerhouse Indiana University. For years, Indiana’s success has, in part, been thanks to skillful players gathered from St. Louis.

Here are a few St. Louisans that represented Indiana University:

One such player, with an interesting connection to St. Louis, would be author Whitey Kapsalis. As a kid, he briefly landed in the St. Louis suburb, Collinsville, IL, before eventually becoming captain of Indiana University…as a walk-on! Unheard of! If you haven’t read To Chase a Dream, (Meyer & Meyer Sport 2014) you might want to. *

St. Louis City SC will also rely on local talent, in part, to guide its opening season, including John Klein of Saint Louis University. This 2023 season opens the beginning of something special for St. Louis City SC, St. Louis, American soccer, the MLS, and international soccer as this team is not only stepping into MLS but that of the international soccer community. It’s a big moment and there’s

much more in store for St. Louis in the days ahead.

* Kapsalis also wrote, The Leadership Code, (Meyer & Meyer Sport 2017) an empowering message of the true definition of leadership as a quiet confidence that truly desires the good of another and leaves others better off.

Shane Stay wrote The World Cup 2018 Book, The Women’s World Cup 2019, The Euro 2020 Book, European Soccer Leagues 2019, Why American Soccer Isn’t There Yet, and The Cairo Project. In 2008, he played professional soccer with St. Louis Illusion. During his career as a soccer player, he earned a Missouri Club State Championship with Busch Soccer Club and a Holland Cup Championship with a Metro East team. In 1999, he founded the first online Current Events Game (CE Game). He has appeared on TV and has been featured on numerous

radio broadcasts, including ESPN and NPR.

Take a look through our shop to see what other soccer books you might enjoy owning. If you have any questions, you can contact us here or give us a call at 317-352-8200.

Cardinal Publishers Group has a mission to help independent presses connect between content and reader, and we have been doing this since 2000.