Getting Ready for the World Cup 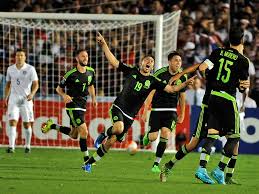 The USMNT is getting ready for the World Cup in Russia. First, they must qualify and learn from 2015. The US men’s team squandered the 2015 Gold Cup, took an embarrassing 4-1 defeat with Brazil last month, lost the huge match with Mexico this past Saturday (missing the opportunity to play in the 2017 Confederations Cup) and took a defeat on October 13, 2015 against rival Costa Rica. On top of that, Klinsmann sent home the very player he called the “best outside right back” in the last World Cup. Everything was falling apart. Summing up these events, on October 13, 2015, commentators said, “Where’s the creativity going to come from?” and “Change has to happen,” according to Taylor Twellman on ESPN. Referring to this moment in defeat, Bob Ley, also of ESPN, said it’s “…As large a crisis as we’ve seen in US [soccer] history.”

When asked by his commentating partner, “What creativity?” Twellman did not divulge a detailed answer. But he, along with any passing observer, could easily attest that something was off: a USMNT crisis in 2015. Fans have buckled down at the bar, drinking this expensive cocktail, combining trepidation with hope and optimism for over twenty years, leaning on Donovan – who brought a different attitude, exuding the confidence that screamed with a laid back LA accent “we can beat anyone, anytime” – with Dempsey later coming to his side, saddling up, creating a partnership, and, more importantly, acting as the clear replacement to Donovan whenever he would leave the team, which had recently come to fruition. Both players, whether you liked them or not, had a “knack” – that ability to add a dangerous pass which other players cannot deliver just the right way. In the most recent 3-2 Mexico loss, Dempsey was absent much of the game, however, his few deft passes were effective, leading to near scores. He’s the leader, adding that extra element for his teammates. Every team has one. Messi, C. Ronaldo, Herrera and Guardado, Ramos and Preki, as well as Zidane and Platini in past years. If Dempsey, who is already battling injuries, goes down with another more serious injury, it would be very grim for the team’s immediate future. What bothers people is the lack of any obvious protégé waiting in the wings.

You can’t mention Freddy Adu without someone checking your temperature, and then you’re accused of heresy. Yet, the same formula has been tried over and over, and look where it’s gotten us. The larger point is that it’s not about Adu or Dempsey carrying the team on their back. It’s about fielding a group of players in their likeness. There have always been guys like them, and there always will be. They’re out there. The idea is to corral them at the same time.

My book illustrates the answers to all these questions and dilemmas revolving around creativity – it illuminates how dribbling, passing within the two-man game, playing across the field, adding style and attacking with defenders will put the US on a different platform altogether. The beauty of the American fan is they will see this through, much like how Cub fans have stood by their team through two world wars, a moon landing and the introduction of the iPhone.

At this point, with the same mental approach, with the same lineup malfunctions, the team might be heading down a dark path, very far away from seizing the ultimate destination: A World Cup title. With the right approach and lineup, I believe winning the World Cup could happen in 2018, with US players standing next to the trophy. As crazy as that sounds. But it’s up to the President and coaching staff – who have operated in a vacuum for years – to approach things with a drastically new vision.

The Copa America 2016 will be a great opportunity for the USMNT to prove they belong at the top.

Brought to you by CPG News & Information Services.