A Salute to Yogi Berra

The following are excerpts from Bronx Bombers: New York Yankees Home Run History by Lew Freedman, published by Blue River Press and distributed by Cardinal Publishers Group © 2015. Please join us as we give a salute to Yogi Berra. 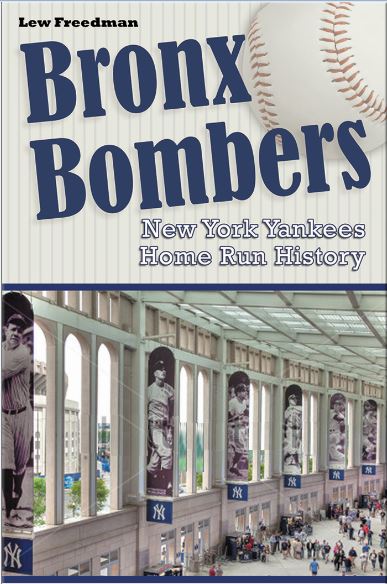 Lawrence Peter Berra was born in St. Louis in 1925 and grew up in that city. His best friend was Joe Garagiola, another catcher, who became more famous as a broadcaster than he ever was as a big-league ball player.

Berra had a knack for a few things in this life. He did not pursue higher education, quitting school in the eighth grade, and as a big-leaguer it was said his most challenging reading was comic books and box scores. Berra excelled as a hitter and fielder and as reader of men. He was a leader on the field when he caught, a magnificent handler of pitches. Later, he became a successful manager and coach.

Berra was known for sticking up for his guys and sticking out in a crowd because he uttered pithy sayings picked up by sportswriters. His most famous comment was, “It ain’t over till it’s over.” As the years went by it was never quite clear if Berra had actually said what was attributed to him or had his words embellished by overzealous sportswriters. In the end it did not matter because the words sounded as if he would have said them.

Yogi had the capacity to make people laugh, intentionally or unintentionally. He once said, “I really didn’t say everything I said,” referring to the confusion of the accuracy of some quotes attributed to him.

Berra stood 5-foot-7 and weighed 185 pounds. He possessed the squat look of a catcher, a body type that seemed to fit the position. He batted lefty and had a great eye for the pill. He was a bad-ball hitter in the sense that if he wanted to hit a pitch, it didn’t matter if it was out of the strike zone. Yogi would find it and blast it. Berra’s swing covered most of the plate and its vicinity and he was labeled a bad-ball hitter. His response was, “If I can hit it, it’s a good pitch.”

Berra is a member of the Baseball Hall of Fame and the Yankees retired his number eight uniform.

When he was in his 20s some seasons Berra was exclusively a catcher. A little later, in order to save wear and tear on his knees, he played outfield, too. A 15-time All-Star, Berra was sometimes overshadowed by Joe DiMaggio, or later Mickey Mantle, but those in the know realized he was the indispensable man for the Yankees and he won three American League Most Valuable Player awards.

Another thing about Yogi: He was a winner. During his playing career between 1947 and 1963 the Yankees won 14 pennants. He played in 14 World Series, 75 Series games in all and won 10 championship rings. He added to that total later as a coach and manager, too, ending up with an incredible 21 World Series involvements in three in-uniform capacities. Berra smacked 12 World Series home runs and drove in 39 runs in World Series play.

When it comes to the all-time Major League list for World Series stats, Berra’s name is all over the chart. That RBI total is second. The games played total is first. Berra is first in at-bats and plate appearances, first in singles, third in walks, first in doubles, third in homers, second in total bases, second in runs, and first in hits (71).

Obviously it took Berra quite a bit of effort to prepare since he said, “Ninety percent of the game is half mental.”

Among some other memorable comments attributed to Berra was the way he showed gratitude upon receiving a special honor. He said, “Thank you for making this day necessary.”

Make no mistake, Berra was proud of his hitting prowess and he was not ashamed that he poled several balls out of the strike zone a great distance.